If you like dancing, will you ever get tired of it? I don’t think factors like age, place or even non-preferable music will come in the way. Likewise, researching about and making hair oil does not exhaust me,” says Radha Krishan Choudhary, aka Nanaji (grandfather).

The 85-year-old resident of Surat, Gujarat, has joined a growing tribe of entrepreneurs who emerge post retirement age. His wife Shakuntala is his business partner.

In June, the duo launched their startup ‘Avimee Herbals’ with an aim to provide a toxic chemical-free hair oil to resolve problems like premature balding, excessive hair fall, greying and dandruff.

With approximately 200 orders a month from across India, the tiny venture has taken off in a big way.

After working for nearly 50 years in his family business, Choudhary retired in 2010 to begin his second innings. Little did he know that his entrepreneurial bug was still not satiated.

So in early 2021 when his daughter complained of hair fall, instead of researching existing hair oil brands or suggesting home remedies (generally involving the right diet) like every other parent, Choudhary went one step ahead.

One morning, he sat at his desk, switched on the computer and began researching the causes of hair fall. With several research papers and books by his side, he would spend hours at a stretch for the cause.

“I was bombarded with hundreds of solutions, including hair fall masks, treatments, organic oils, kitchen hacks but none of them could address my doubts. Finally, I decided to put my skills to use and develop my own oil. I had always been engaged in these little home experiments while growing up so this was just another trial, or so I thought,” says Choudhary.

Impressed by his diligence and focus, Shakuntala joined him in his research. They would identify the cause of each problem and find its solution in different herbs.

“It is all about decoding the human body. For example, a male’s receding hairline is linked to Dihydrotestosterone (DHT), an androgen. For females, insufficient estrogen can cause hair growth imbalance. We searched for herbs that could block DHT to some extent,” says Choudhary without revealing the trade secret.

Based on their extensive research, the duo made hair oil with a cold-pressed technique. It is a blend of more than 50 herbs infused in cold pressed oils like coconut, black sesame, olive, castor, kalonji and more than 50 carrier oils and essential oils.

One thought on “Their is no age to launch your business: 85 year duo launch their startup.” 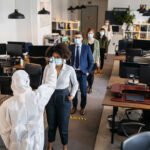